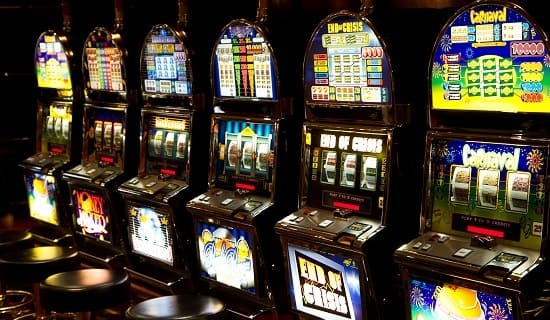 Online slot machines have a long history that dates back to the 1800s when technology was just starting to blossom.

Featuring card symbols and a cracked Liberty Bell as the main drive behind the game, the aim of the game was to land 3 bells. Doing so would pay out a massive 50 cents (or 10 nickels).

Due to how popular this game became, other slot machines popped up at establishments across the United States. Soon after, one-armed bandits, video poker machines, modern slot machines and then online slots machines became all the rage.

The rise of online slots

Starting off with simple 3 row versions of the online slots we know today, basic themes, colours, and betting systems were used.

The internet was still in its infancy when online casinos and their limited game libraries came on to the scene. But with time, those libraries grew as software providers worked harder to create games that captured player’s imaginations and hearts.

Of course, handsome payouts that kept the pockets of players full also helped.

As the internet has evolved and technology has grown to be something we rely on every single day, the online casino world has stayed one step ahead of the game.

Always looking to find new ways to entertain players from dusk ‘til dawn, the fun never stops at online casinos around the world.

There are 4 main areas that have shown the most growth in the online casino world.

Mobile and on the move – Mobile devices have become commonplace in the world as we know it today. Everyone from children to the elderly are sporting the latest in smartphone technology as we schedule our days and keep in contact with loved ones all while playing our favourite casino games.

AR and VR – While not as popular as many had originally guessed it would be, AR and VR allow players to step inside their favourite casino games. This may sound like a good idea, and there are those who enjoy it, but the technology is still not widely available to all.

This may prove to be a huge success in the near future, but for now, it’s fun to play around with before getting back to playing on a desktop, tablet or mobile device.

Gamification features – Adding features that change the way people play casino games is always tricky. It can either add a new level of competitiveness or force players to try something new instead.

While not all gamification features allow players to explore competing against one another, some can be enjoyable by adding new ways to bet and by unlocking special gameplay opportunities.

Fun arcade games – While online slots are extremely popular as they are, there are those who prefer to experience something new while still having the opportunity to place bets and win big. Games such as Castle Builders 2 by Microgaming provide an arcade game experience while still allowing players to bet and potentially win without having to “spin the reels”.

These games are becoming more and more popular as a new wave of gamers branch out into online gambling for a little bit of added fun.